I am really pleased to announce the release of Macro Scheduler 15.

As well as lots of small internal improvements, Macro Scheduler 15 brings native functions for automating the Chrome and Microsoft Edge browsers. We’ve also added some new Excel functions, including one that allows you to run any VBA code you like, making the native Excel functions infinitely extendable.

It was also time for a visual refresh… 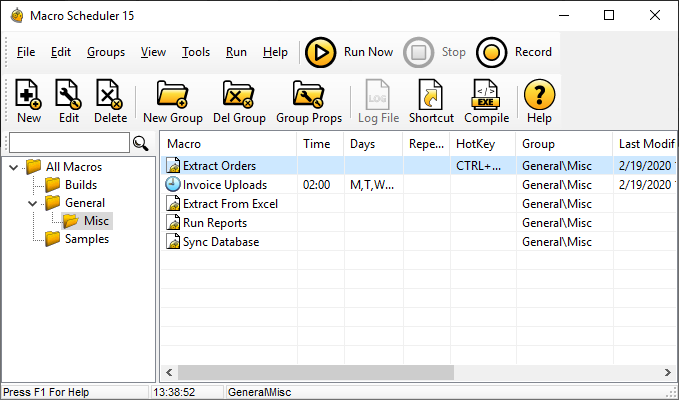 With Macro Scheduler 15 we’ve introduced two sets of new web browser automation commands. One for Microsoft Edge and another for Google Chrome.

These functions use the new WebDriver interface, and connect to Chrome and Edge via Google’s ChromeDriver and Microsoft’s WebDriver or MS Edge Driver components.

Here’s a short video of Chrome being controlled with these new commands:

More Excel functions has been a popular request. So we added some. The challenge though, is how to know when to stop. Microsoft’s Excel VBA is pretty unlimited. There’s no way we could wrap every possible function into a native Macro Scheduler one, so we needed a solution.

Well, for years now we’ve been able to convert Excel VBA into VBScript which can be run inside Macro Scheduler. But converting VBA to VBScript can be challenging. Instead, we thought it would be great if you could just pass any valid VBA directly into Excel. So now you can!

You should be able to record a macro in Excel and then copy/paste the code it produces into Macro Scheduler like the above.

If you have a subscription visit your personal link sent to you in your welcome email.