From the makers of the award winning Macro Scheduler

Automate repetitive tasks to save time 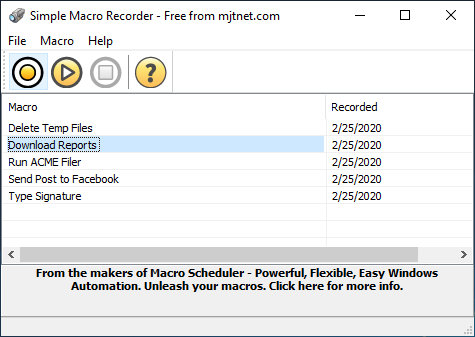 Get All Features For Only $18/month »

Simple Macro Recorder allows you to record a sequence of events to create a Windows macro. The Macro Recorder will record keystrokes, mouse events and window activations, including window positions and dimensions. This makes it easy to create a macro that can be played back to run the task automatically. 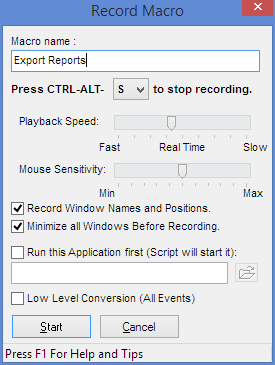 The Macro Recorder creates real MacroScript code that is easy to understand (and edit in Macro Scheduler). When recording a macro you can specify an application to automate so that the Macro Recorder can add the code to open the application and position it in the same place on the screen each time so that your macro will always work correctly.

When you record a macro you can specify the playback speed and mouse sensitivity. Adjusting the playback speed effectively reduces or lengthens the time between individual steps. It is usually best to leave this in real time as reducing time between events can in some instances make the macro less reliable - the system needs the thinking time between those events. Reducing mouse sensitivity means you can remove unnecessary mouse moves between mouse clicks, for example, thus shortening the script and making it easier to read and edit.

The Macro Recorder is ideally suited to less technical users, or those new to Macro Scheduler who want to learn the MacroScript language to make their macros more powerful and more reliable in changing environments. The Macro Recorder in combination with the optional script compiler in Macro Scheduler Pro allows a user to create a standalone Windows application that will run on any PC to automate repetitive tasks in just a few simple mouse clicks.

Simple Macro Recorder offers only a tiny fraction of what is available in our flagship Automation Solution Macro Scheduler. So if you need more power Download a FREE 30 Day Trial of Macro Scheduler, or Buy Macro Scheduler today.

Testimonials
"I evaluated several macro recorders and chose Macro Scheduler because it was the most intuitive. It was also the only program which replayed my recorded test macro correctly on the first attempt."
Patrick E., Somerset
"This has to be by far the best software I have ever purchased in my life. I recouped my investment within the first 10 minutes of using the software. I'm on day 3 now and every few hours I create another free employee to work for me. Thanks MJTNet!"
Bill Karas, Miami Software Development
"Microsoft came in and said there was no way to automate a particular problem. I downloaded Macro Scheduler and had a working fix in one day!"
Ian Smith, UK
"I used to work for a company that used Macro Scheduler, and I think it's just the best thing since peanut butter met jelly. I can't tell you how many hours it saved me there, and I'm finding it will do the same at my new job."
Alan Williams, White River Health System
Full Version

Thanks for Downloading Simple Macro Recorder